How do you counter Longbowmen?

How do you counter massed Longbowmen? This has to be the single most asked question on Age of Empires 2 forums amongst new players. So let’s try to answer this once and for all 😀 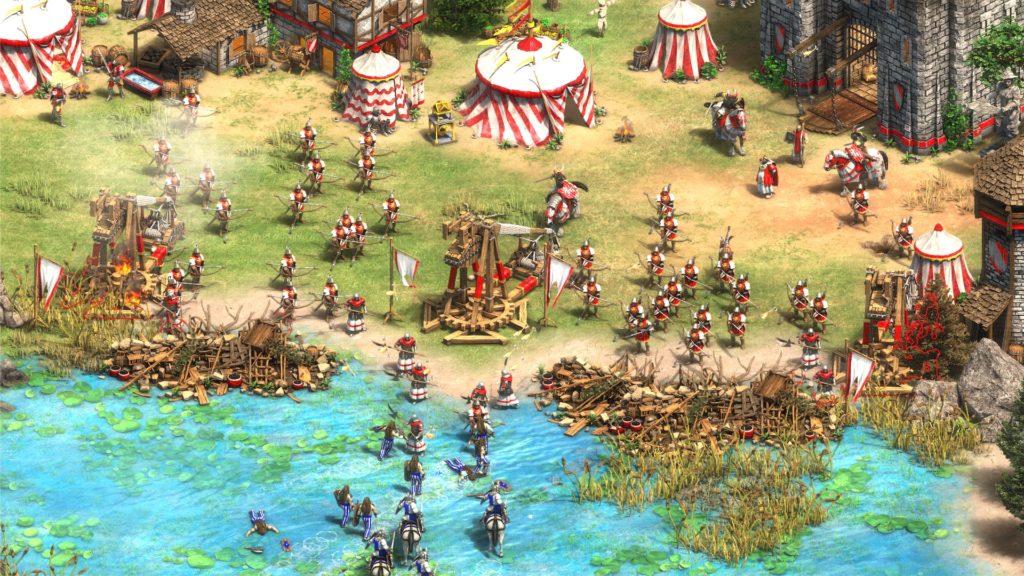 An army of longbowmen. Every player’s nightmare?

An army that’s made out of nightmares: a vast pack of British Longbowmen guarded by infantry to make sure noone comes close. A solid combo, but not impossible to counter at all.

Let’s have a look at the stats of the Briton Longbowman.

Uniquely available to the Goths, it’s the single most effective counter against Longbowmen and their most common guards (Halberdiers). Huskarls have 8+2 pierce armor, which means they reduce the attack of a longbow’s arrow to 1! At 70 HP this means Huskarls stand 70 volleys before going down. By far the easiest way to decimate an army of Longbowmen. Make sure you do both armor upgrades though. With 8 base armor they still pack a punch, but the difference per armor upgrade is withstanding 24, 35 or 70 arrows.

Probably the best all-round counter to the Britons. Siege Onagers flatten a pack of archers with a single shot. They have a smaller range than Longbowmen so it’s important to have multiple Onagers on the field at once. Otherwise the British player can just pick off your onagers from a distance. If you protect them with some Halberdiers, it will also be impossible for the Britons to attack your siege with cavalry.

Elite Skirmishers are the standard counter against Longbowmen. They beat every archer but are bad against about every other unit. Additionally, they’re also a counter to Halberdiers, the most common unit used in combination with Longbowmen. Skirmishers are usually bad by themselves, and are best combined with high HP melee units such as Paladins. Make sure to get all blacksmith upgrades when making Skirmishers, otherwise you’ll be badly out-ranged!

Paladins are another common counter. Although they can be stopped by Halberdiers, an army uniquely composed of Longbowmen is an easy prey. Just make sure to have all your blacksmith upgrades. Because a fully upgraded Paladin will then withstand 45 arrow shots. Not quite as good as the Huskarl, but keep in mind it also has a much higher attack and speed. Bonus points if you have a Persian team mate, who will give you +2 attack as a team bonus!

Available to only 3 civilizations but a good counter nevertheless. Just like Paladins they have a decently high pierce armor, 4+4 to be precisely. Now, all civs have different Eagle Warriors, so how they counter Longbowmen also differs. Mayans have the best deal, absorbing 33 shots before dying. Aztecs and Incas have to do with 20 shots. However, Aztecs will kill their opponent faster: in only 3 strikes it’s over for our Engish fella. Mayans and Incas need 4 strikes each. More than any other unit, Eagle Warriors rely on their blacksmith upgrades though.

Unique to the Berbers, the Genitour is essentially a mounted Skirmisher. Combining mobility and a direct attack bonus, the Genitour allows you to directly counter longbowmen and close in on fleeing ranged armies! Additionally, the Genitour is a team unit, so every civilization can train it as long as they have a Berber player on the team.

The Mayans have another card up their sleeve to beat Longbowmen. Although it’s a narrow win, they beat Longbowmen in even numbers, mainly because of their high pierce armor (2+4) and HP (65). Additionally, they beat almost every other unit the Britons can field (except for Skirmishers & siege).

Similar to the Mayans, the Vietnamese also have an archer with high pierce armor (6+4). This puts their ability to soak up arrows on par with Huskarls. Despite their lower HP, they can still withstand 45 arrows! Additionally the unit is relatively fast, which makes it much easier to pick battles.

Although expensive, the Koreans are probably best equipped to deal with a massed up Briton army. Not only do they have Siege Onagers (with +1 range), but they can back them up with War Wagons. With 200HP and 4 pierce armor, they can pack a serious punch. Koreans must be careful though, individually, their units can easily be picked off from a distance!

Every Elephant unit in the game straight up counters Longbowmen! You just have to be careful for Halberdiers!

Last but not least, Siege Rams have to be mentioned. Rams don’t actually counter any human unit, but they’re the ideal meatshield against archer fire. If you send them up front while charging towards the enemy, they’ll soak up all enemy archery fire (270 arrows!) for you while your units in the back stay safe. This way you negate their strongest point: range. Because once you’re close enough, Longbowmen are killed quite fast. Using this tactic, even Champions stand a chance against them!

Siege Rams are ideal to soak up archer fire.

So, how do you counter longbowmen? All things considered, Longbowmen are an almost mythical unit in the series, but they’re by no means invincible. All civilizations in Age of Empires II have an answer to them!