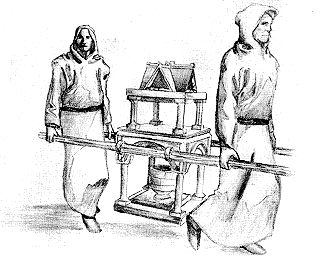 Gold gives you access to your strongest units, so how to get the most out of those gold mines? And how important are relics really?

Note: the article goes into a lot of detail. For an overview, you can check out the video at the end of the article.

If there is one thing even top players can argue about when it comes to booming it’s when to do certain economical upgrades. The basic upgrades for wood and food form no point of debate. But the ones for mining upgrades seem to be more of a personal preference rather than a globally accepted truth. So let’s take a look at the gathering rates for goldmining. I came to the following figures with this setup: 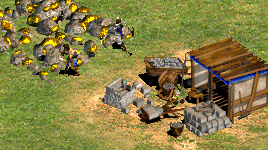 The villagers are 1 tile away from the mining camp. This is the most realistic setup since only a very limited amount of villagers would be able to gather gold from a distance of 0 tiles. We ignore the concept of “bumping” for now.

As you can see, the effect of the wheelbarrow and hand cart techs is rather minimal. Only when you take bumping into account, the effect gets bigger. Let’s explain the numbers into more comprehensible language now.

If you have 10 gold miners then it takes about 28 seconds to gather 100 gold without any upgrades. But if you pay for the goldmining upgrade, then it will only take the guys 24 seconds to gather 100 gold. A minimal difference you say? Wrong, because in those 4 seconds, the player who has goldmining researched already dug up 15 gold extra. Which equals the work of an extra villager! So technically you added an extra villager to your gold mine without even having to use your precious TC time for it.

If we take the example to more extreme forms we take a look at a situation with 30 miners. 30 miners are generally considered a good amount to have in imperial games for a normal imperial army. We assume that hand cart is researched, which is rather normal in a booming game. So if 30 miners gather 1000 gold it takes them 1:30 without any goldmining upgrades. 1:18 with gold mining and only 1:08 if gold shaft mining is researched too! Imagine you can pay for your precious Paladin upgrade half a minute earlier than your opponent. That’s quite a difference. And those half minutes add up too. After 5 minutes of playing you’re already 1000 gold ahead! That’s 13 Paladins more!

We didn’t take bumping into account here. Bumping means that once a villager has to drop off his load, he might “bump” into other villagers. This is inevitable and leads to slower gathering. If you do the wheelbarrow and hand cart tech however, villagers carry more and need to run back and forth less. Thus decreasing their chance to bump into their colleagues. But the general rule for bumping is: if your resources start to look like ant nests, start sending villagers to other places.

Besides mining you can also gather relics to collect gold. The benefit of relics is that they are an endless income of gold that doesn’t take up population room. Let’s take a look at how fast they generate gold.

Let’s say you’re in a lategame situation with Aztecs. Gold is getting sparse and you need to brace up for a trashwar. If you were able to collect all the relics on the map, you’d be able to mix in 4 eagles every minute! And therefor totally making up for the Aztec’s weakness in trashwars. Similar story for other civs, especially if you invested in onagers earlier then you can keep adding onagers to your army all game long. And these behemoths are a huge deal in trashwars!

Last but not least, trade carts. Trade carts are the absolute pinnacle of post-Imperial gold income. The rules here are very simple: build your markets as far apart as possible and make sure the tradeline is not cluttered with buildings. The further markets are apart, the higher the income per trip from a trade cart becomes. And of course, a cleaner trade line means your carts are obstructed a lot less, thus boosting your gold income.

However, be wary of invading troops of (cavalry) archers! A group of those in your trade line could decimate your trade line in matters of seconds. Walling and building fortifications are thus necessary to protect your gold income.