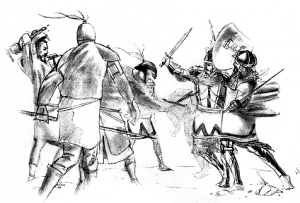 Feudal Rushing or Flushing is the most common tactic on open land maps. Let’s see what it’s all about.

The principle of a Flush is to disrupt your enemy’s economy as fast as possible. If you’re giving him trouble in the feudal age, he might struggle in the castle age and maybe even for the rest of the game. Staying ahead and dictating your will is a certain way to victory!

In short: as fast as possible. Going for a fast feudal with a strong enough economy to make a small army straight away should be possible in 9.30 to 11.00 minutes. This largely depends on your civilization and your build up in the Dark Age. For more information on each rush, follow the links to their respective articles.

There are only 5 units in the Feudal Age. The rock-paper-scissors countering system is thus quite straightforward. But is it? 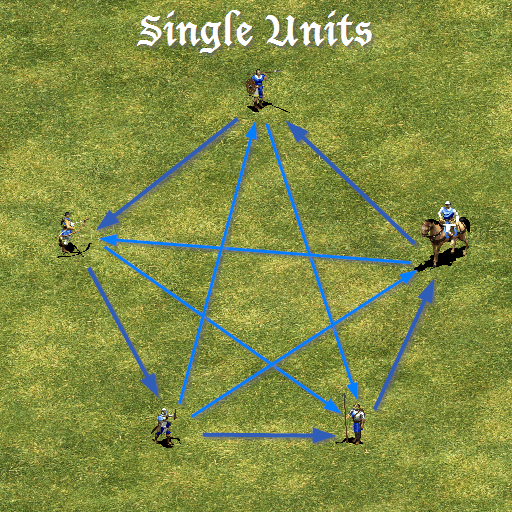 This chart shows how units counter each other in small amounts (10 units or less). The big blue arrows are the main counters. The light blue arrows show how the units do against each other while not always being the most straightforward counter.

From this we can easily deduct the most popular and effective strategies.

Now, Scout and Man-at-Arms (MAA) rushes are more of an early rush. Due to their high cost it’s common to switch to other units or complement them, usually with some sort of ranged unit. Ranged units also have the advantage that they become stronger in groups. 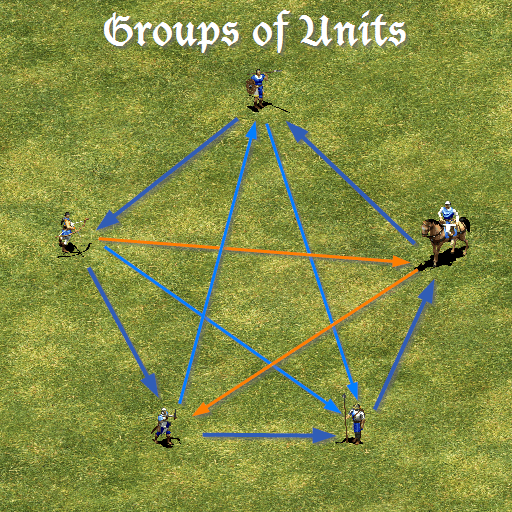 As you can see, the counter chart is almost the same, expect for 2 changes. The longer the game goes on, the better Scouts are versus MAA. This is mainly due to the Bloodlines upgrade, which gives them +20 HP. The other change is more debatable and concerns the relation between Scouts and Archers. In equal numbers, scouts will beat Archers, especially with all upgrades. But archers have the advantage that they can hide in narrow spaces and are easily complemented by a few spearmen, which tear the scouts apart. Above that they’re a lot cheaper to mass.

Now what is the best combo to make? It all depends on what your enemy makes, but generally speaking, combinations with archers tend to fare well. This is because archers cost gold+wood. Which are both easier to gather than the slow food so you can go to the Castle Age faster. Compared to the other ranged unit, they’re also good at killing villagers. Only 14 archers are needed to kill a villager in one shot, whereas 40 skirmishers are needed to do the same. Last but not least, they have a strong and cheap upgrade in the Castle Age.

Last but not least, let’s take a look at this chart. It’s only a quick reference since practice will teach you a lot more!

For more details on each Feudal Rush, please check the links earlier in this article. For a general overview, let’s take a look at this video from ZeroEmpires, outlining the basics of various feudal attacks.