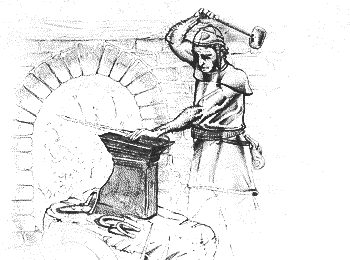 Every good boy and girl will research blacksmith upgrades, but when to do them? What’s their real strength?

The basic principles for doing blacksmith upgrades come as a double sided story. One story for archers and one for melee units.

Archery units must start with their attack upgrades, and do their defense upgrades later. Why? First of all, the attack upgrade also adds 1 range to an archer. This means that besides having a greater attack, you can do the attack earlier.

Melee units on the other hand, infantry and cavalry, must do their defensive upgrades first. Why? Because they have a great attack by nature. They must get to other units first before they can kill them, so maximizing their chance to get there, is more crucial than having a greater attack. This goes especially against archers. But even if you’re in a pure melee fight, (then it doesn’t matter if you do attack before defense) it is still more thoughtful to research your defensive upgrades first. Because once you won a melee fight you’ll probably head out for your enemy’s economy and there you’ll encouter TC or tower fire. It’s also more thoughtful in the possible event of your enemy changing his army to archers.

Let’s take a look at how blacksmith upgrades affect some specific units and situations.

Archers are used frequently in feudal wars, mainly for not costing food, which can speed up aging. The most important strength of archers is their capability to kill villagers. 20 archers can kill a villager in one shot, but once you research fletching, you’ll only need 14 shots for a villager to go down. Fletching increases the strength of archers against villagers by a lot.

Crossbowmen vs knights is a fight often seen in early castle age. Players who have a of archers left from the feudal age can now turn them into powerful crossbowmen. Because even though knights beat archers 1v1, archers can be massed from feudal age and when you can keep them together, they’ll tear lonely knights apart. The point of knights armor vs archer upgrade lays in “staying ahead”. Bodkin Arrow is notably cheaper than the second armor upgrade for knights and will sure make your archers untouchable for knights in early castle.

Knights have a basic armor of 2, while Crossbowmen have a basic attack of 5. That makes 3 damage, or 40 arrows per knight (we assume bloodlines are researched).

If you can keep it so that your group of archers needs just 1 strike to kill 1 knight, you’re settled. Given that a group of units can consist of 40 units at max, you can see how crucial it is to research bodkin arrow.

No single upgrade is more cost effective than the elite eagle one. The strength of those feathered warriors is insane in early imp, and makes meso civs the top tiers in early imp games. Eagles are near to worthless however if they don’t make a stop by their local blacksmith. Especially for some extra armor. With all armor upgrades, eagles have 8 piercing armor. Which is the same as an elite huskarl without upgrades. If your enemy goes heavy on archers in the castle age or even worse, heavy on skirmishers, you’ll have an easy time once your eagles have all their armor upgrades.

Also keep in mind that Elite eagles are also very cheap and easy to mass.

In the table above you can clearly see how important chemistry is (besides the normal archer upgrades!) It is not adviced to go archers against eagles, but in some situations you’re simply forced. Doing all archer upgrades and chemistry will be your only chance then. In the meanwhile you can try to save up for a real counter to eagles (usually infantry).

This one is a bit counter-intuitive, but very crucial to do. When someone uses knights to raid your economy, he’ll often pay for the 1st and 2nd cavalry defense upgrade. You must respond with fletching then, even if you don’t plan on making archers! The reason is your TC fire. Town centers have a basic attack of 5 while knights with +2 armor have a total of 4 armor. With 1 damage per arrow that means 120 arrows per knight. Doing fletching will double your damage against raiding knights.

The bottom line is that blacksmith upgrades are incredibly important and are necessary in almost every situation. Especially in imperial games, every upgrade is a necessity.