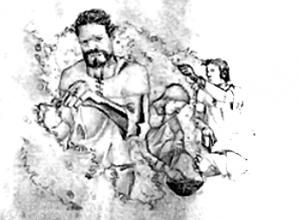 Or how to properly micro your villagers so they work as efficient as possible. Beware, a very detailed article ahead!

Where the telescope ends the microscope begins, and who can say which has the wider vision? – Victor Hugo

The truth is simple: the earlier in the game, the more important microing your economy is. The longer the game lasts, the more you must shift your focus to macro economy and spend more time microing your army. Now let’s see how to properly micro our villagers in the early ages.

Let’s start of with the easiest one: berries. Berries are a rather slow resource to gather, but they’re so easy and accessible that few buildups go without the luscious fruits of these bushes. The first thing to keep in mind is how many villagers you want to put on your berry bushes. If you want to go 4 villagers or less, you can safely build your mill so it touches as much berries as possible. When tasking your villagers, you then split your villagers so they’re paired on each side of the mill. This will result in a minimum amount of bumping (=villagers hindering each other) and a maximum amount of resources being collected. 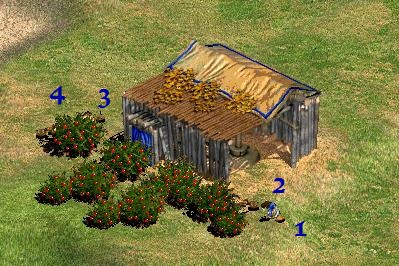 This comes with an additional advantage too, because when your villagers are under attack, by a single scout for instance, they can fight together, whereas otherwise a villager alone may die a lot easier. If you’re expecting the enemy to drush, you can even anticipate more by locking in one of your villagers with your mill. 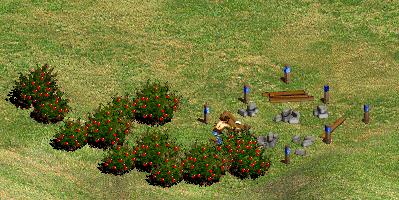 Your first microing steps in a game are most of the times those woolly lamb chops. Microing sheep obviously starts out with finding your sheep. A swift circle around your TC and you should have found them out rather fast. Civs like the Incas, Spanish, Chinese, Mayans and Huns can even use a villager to help in the scouting process to make sure they get a kick-ass start. Why these civs?

Once you gathered your sheep under the shadow of your town center, it’s time to slaughter them. One sheep at the time, because otherwise their meat would just rot away and we don’t want to waste such delicious lamb chops. Now, how many villagers do we need?

Now, what to do once a sheep is completely eaten? Your villagers will become idle for a little while and look around for the next sheep, but we don’t want that to happen, precious seconds in the growth or your empire are getting lost like this. 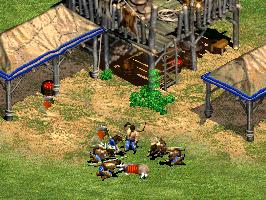 You can see the trick in the screenshots above: once a sheep is about to run out of food, bring another sheep close to your villagers and kill it already. Once the first sheep is depleted, all villagers will directly move to the new sheep and won’t lose too much time running around.

There is no difference between those animals, except for cows! They have 150 food instead of the standard 100, which allows you to be more creative (and faster) with your build orders.

Milling is the easiest way to hunt deer, you build a mill somewhere in the center of the deer patch and eat them as you would eat sheep: one deer at the time and make sure to hunt the next deer in time so you don’t have idles.

You can also hunt them without a mill though. In this case you usually send out 2-4 villagers per deer and bring the meat back to the nearest dropsite. 3 villagers will carry 105/140 meat back home. Leaving the rest to rot. 4 villagers won’t let too much meat rot, but they won’t carry 35 meat each. 2 villagers is only recommended for Goths, if your buildup relies on deer at least.

Last but not least you can lure deer on maps like islands, team islands, migration and arena. Or in other words: maps where you don’t really need your scout that much in early ages. For more information, check the Hunting article.

There’s no skill in chopping wood? Sure there is! Okay, not too much, but a few little tricks can boost your wood income by a good percentage. First of all, woodcutting is subject to a lot of bumping. Villagers don’t carry a lot of wood and nearly any tactic requires a steady income of wood. So that’s a lot of villagers who run around a lot.

However, before we start to cut wood, we have to build a lumbercamp: the best position for this is as close to the forest as possible, while touching as many trees as possible. 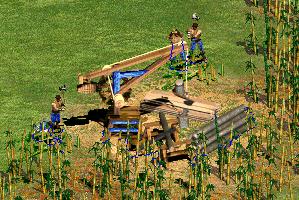 One lumbercamp might not be enough to sustain a steady wood income though. Bumping becomes an issue around a crowded lumbercamp and before you know it, you have blocked villagers. If you have 10 villagers and you have 1 blocked villager all the time, that’s a decrease of 10%. Quite a bit for such dumb and avoidable issues. The easiest way to solve this is to build multiple lumbercamps and split your villagers evenly among them.

Last but not least, trees are depleted quite fast. And with every tree that hits the carpet, a villager must run a little bit further to knock down the next tree. So rebuilding your lumbercamps once in a while is a must to keep your villagers focused on their real task: cutting lumber instead of running around with lumber. 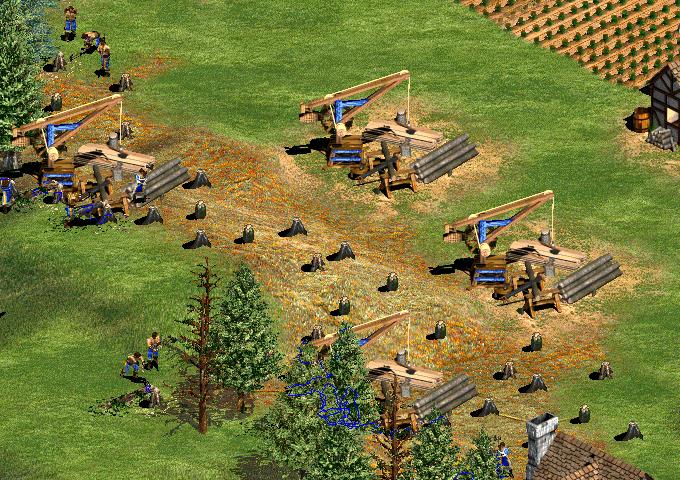 Yes, there are even smart ways to mine your stone! But the way is quite similar to the berry way: mining stone is usually not a massive activity, only a few villagers are needed and thus it might be smart to make your mining camp touch as many piles of stone as possible. If you’re going to put a lot of activity around your piles, then it’s better to position the mining camp so that as many villagers as possible have to run as less as possible. 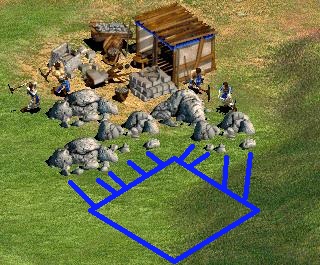 This is also the rule of thumb for all resources actually.

Gold is actually the same as stone, except that you’ll probably want as many villagers as possible on a goldmine. So it’s best not to block too many possible gather points with your mining camp. The last picture in the previous paragraph demonstrates the perfect placement for a mining camp around a pile that will be heavily used. Also, do not hesitate to add a 2nd mining camp on the other side of the mine. If you’re Japanese you can do this a lot faster than other civs, even on berries if you want!

No, it really doesn’t matter where you put your fishing boats on a fishing spot. As you try to divide your boats among the available spots you’ll do fine in terms of efficiency. However, it’s important to notice the difference between shore fish and deep sea fish. Shore fish is gathered a lot slower by fishing boats, so it’s worth to scout the seas a bit and look for better sources. But to what extent? Well, 14 tiles.

A deep sea fish is more efficient than a shore fish if it’s no more than 14 tiles further than the shore fish.

Last but not least, a very important point has to be made about farm placement. Not only is it important to place your farms as close as possible to a drop site, but also its orientation towards the drop site is important. On the picture below you can see how farms really work: 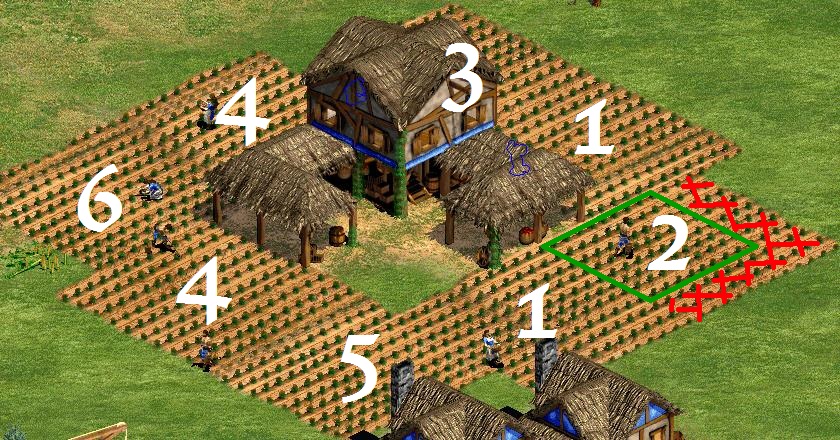 First of all: villagers only gather food from the green part of the farm. The red part is just excess area that only creates a longer distance to walk. You can see how farms on the right of your town center/mill don’t suffer from this extra distance. To illustrate how big this difference is: if a farmer does about 20 trips for a single farm it means that the villager on the right side can do a walk around your town center to catch some fresh air before starting, and still finishing before the villager on the left side.

Does this mean we must only make farms on the right side of a mill/TC? No, but when you’re doing tight build ups, then every second can matter and it’s best to not waste them early on.