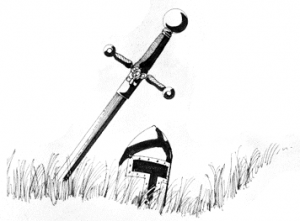 Did you ever wanted to calculate the outcome of a battle between two armies without actually testing it? This article will teach you the deep secrets and magic of fighting!

Lanchester’s Law are two mathematical formulas that describe the relative strength of two military forces. It was developed by an English mathematician Frederick William Lanchester during the First World War (1916 to be exact). He developed this formula by analyzing the battles of air forces and today his formula is not only used in military, but also in the area of economics. So let’s see how this applies to AoC!

The first law only applies when units fight one by one which will most likely never happen in AoC, and thus it’s not so interesting for us, but the second formula is fairly more interesting.

So let’s try to apply this formula in AoC. “E” the Force Ration in AoC is calculated in the following manner:

In easy words: a is the sum of all units’ attack points of army A minus the armor total of army B (b is exactly the other way around). That also makes the formula easier by replacing E. Then it will look like this:

So now you know the formula! Or at least confused enough to continue reading. Let’s apply this in the real AoC!

Now let’s calculate how many skirmishers in army A (5 skirmisher side) will survive. a and b in this case is normal attack 2 plus attack bonus against archers 4 minus the piecing armor 3 so a and b will be 3.

The surviving units of army A is 4. You can see that the unit ratio is only 5:3, but the actual ratio during the fight is 25:9. If you test this in AoC you will get similar results

Now things will become complicated if two different units types are fighting. Then you have to consider their attack, attack speed and hit points. a and b is calculated in this following manner:

Now we are ready for the next example, shall we?

In this case it is obvious that army A with 10 skirmishers are going to win. So let’s calculate the surviving units of army A after defeating all units of army B.

In this case it means that if you add up the hit points of the skirmisher it will be equal to 8.4 skirmishers.

The most practical example is when we seek the seas. Here’s an analysis for grush wars.

So just 1 galley (10% of army A) makes such an enormous difference. This brings us to probably the biggest lesson from this article. If your army is bigger & better: fight! Even if you only have 1 unit more, the difference might turn out to be enormous. Especially in water based maps as both players will most likely get caught in a galley war. If you play it well, 1 single galley can make the difference.

In Lanchester’s Laws units do not attack efficiently. In real AoC players micro their archer army and kill enemy archers one by one which is not considered in Lanchester’s Laws. Therefore by theory 4, 5 archers will win against a knight, but in practical AoC it does not because the knight attacks an archer until he dies and then move to the next unit.

Also range, speed and blast radius are not considered either. These factors depend on the situation (e.g. in a closed gap cataphracts with logistica become stronger than on an open field) so the player must evaluate the result by his experience and knowledge.

So what have we learned? Well that fighting with bigger armies will gain you the advantage! Well I admit, most of us knew this fact, but I will tell you more. First of all the real relative strength of two armies are the squared units numbers therefore the difference in strength of two armies are often a lot more than you imagine. Also from this knowledge there is a tactic which is often used in practice as well. If you are outnumbered and you can not flee, split up your army. You can damage the enemy army more by fighting one by one unit which is shown in the first formula. However, if you’re caught into an enemy’s town. You might opt for staying in group and kamikaze’ing your army into killing villagers.

Another thing to remember is that this formula only works with one type of unit at the current time (it is not possible to calculate with a mixed army). If someone knows how to apply this formula to mixed armies, please feel free to share.