How do you counter War Elephants?

How do you counter massed War Elephants? They’re the beefiest, strongest and tankiest units of them all, so where do we go from there?

The most satisfying army to field and one of the most annoying ones to fight.

Before we delve into their counters, let’s take a look at their stats:

Halberdier: The easiest counter to War Elephants has to be the Halberdier. They deal a whopping 66 damage per hit. However, they’re quite weak themselves, so they die after only dealing 2 strikes. So as long as you send groups of Halberdiers and not individual units, you should get them on the ground. The best part is that Halberdiers only cost a little wood and food. While Elephants cost a whopping 200 food, 75 gold.

Monk: Throw your wololos in the air like you just don’t care. Monks are the single most effective unit against War Elephants. And most important, they’re available to all civs! Persians can react to this by doing the Faith research, which makes units 50% harder to convert. But they lack the Heresy upgrade, which makes units die in case they’re converted. Because of this, monks stay a very effective counter. Just make sure to combine them with Halberdiers, otherwise you can easily be countered by Hussars yourself.

Heavy Scorpion: This is probably the most surprising unit of the bunch, but these guys have a bonus against elephants as well. But once again, the power lays in large groups. A scorpion’s bolt passes through a lot of units. And it will inflict damage to every unit it passes. A single bolt does 18 damage against an elephant. But in a group of elephants it can quickly rise to 100 damage per bolt! Spread formation is very crucial if you’re facing an army of Heavy Scorpions against your elephants to minimize the damage. Also, Scorpions aren’t that effective without their Heavy upgrade.

Heavy Camel: Just like Halberdiers, camels are an easy to play counter. They don’t deal that much damage however, but still pack a punch at 25 a pop. Indians do a bit better with their Imperial Camels at 27 per hit but also have more HP to throw in the scales. However, camels are not the best choice. They’re okay if you have nothing else available but all the aforementioned units perform better.

Mameluke: Unique to the Saracens, who already have superior Camels. But the Mamelukes actually make for a great counter unit! They do 22 damage per hit, but their strength lays once again in their masses. A group of 30 Mamelukes take down an elephant in a single strike. And the best thing is, they can hit and run, essentially not losing a single point of damage while fighting a large group of dumbos.

Genoese Crossbowman: The Italians have the only “true” ranged anti-cavalry unit in the game. This gives them an edge over a lot of otherwise heavy units. At 17 damage per arrow  a group of 37 of these crossbowmen suffices to take down an elephant in a single shot.

Kamayuk: Unique to the Incas and infamous for being a mixture of a Halberdier and a Champion. Kamayuks deal decent damage against elephants (20) but their strength is at the tip of their spears. Their 1 range gives them the ability to surrender an elephant without having to fear for its trample damage. This is probably the only infantry unit that really benefits from spread formation for that matter 🙂 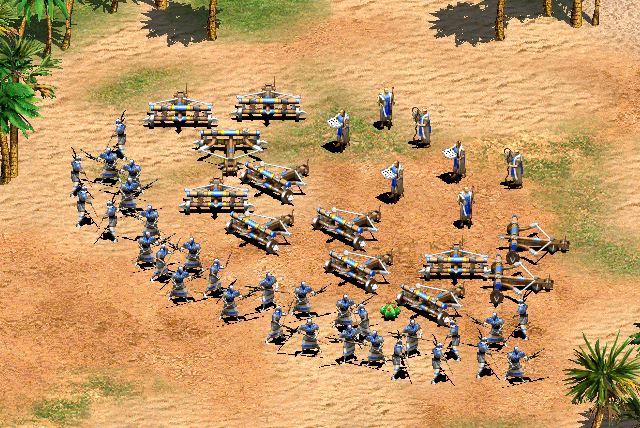 No elephant will get through this. The combination is available to a lot of civs as well!