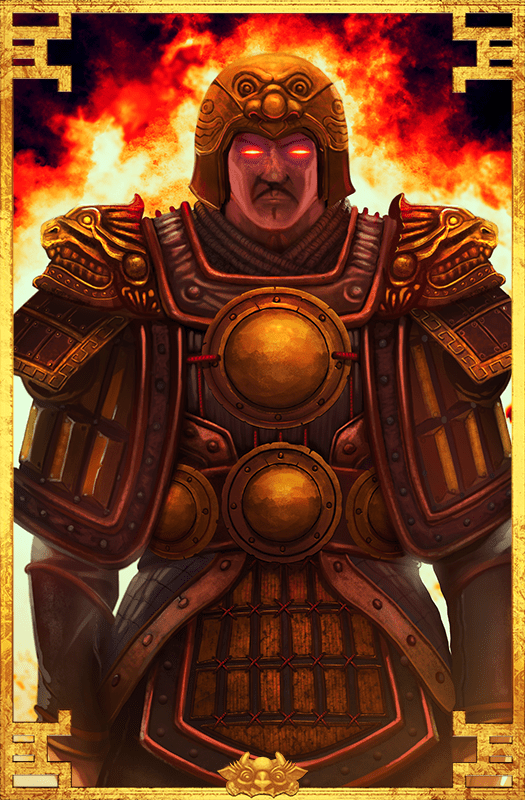 Chongli or Zhurong is a god of fire and warfare, who rides a giant tiger into battle. He has a son, Gong Gong, a sea monster and troublemaker.

Gong Gong once plotted to take the throne of heaven from Shangdi, and Chongli his father donned his armor and mounted his war tiger to stop him. He and Gong Gong dueled for many days in the heavens, and finally Chongli smote his son down to Earth. Furious at his loss, Gong Gong bashed his head against the pillars which held the earth in place, and Nü Wa had to fix the world with the help of the great turtle Ao. Chongli, victorious, ascended back to heaven as the god of fire and Lord of the South.

The Vermilion bird is a mythological creature which represents fire, summer, and sometimes goes by the name of Vermilion bird of the South. With its multi-coloured plumage perpetually coated in flames, the Vermilion bird’s dominant colour is that of fire, much like its Egyptian counterpart Phoenix. Considered a bird of elegance, it is known to sing and break into dance at will, and can even make small seeds grow into giant trees. At night, however, the elegant creature shows its far fiercer side as it dines only after sundown and feasts on snakes and serpents coated in cinnamon.

Inferno: Chongli unleashes his fiery wrath on the enemy by casting the Inferno God Power. This Mythic Age God Power will burn down enemy buildings and scorch any units located inside its radius. The Inferno is not very selective once unleashed, so look out for allied units in the targeted area.

Almost. Ho-Oh is based on fenghuang (the Chinese phoenix which is a female counterpart to the dragon). Not quite the same creature as vermilion bird, though quite similar.

the vermilion birds are way to strong atm. They can level an entire army with 1 or 2 birds alone. unless you have ranged heroes ready for it they will melt any entire army in seconds.

Vermillion is too good… How exactly are we going to kill it?

It will be fixed soon! Was a silly glitch that made him completely OP…

What about a japanese mythology?