Although the core of Age of Mythology are the mythological creatures, they’re nothing if they’re not surrounded by myriads of mortals to crush. The Chinese will feature 10 unique human units for your Myth units to play around with. Let’s take a closer look at some of them. 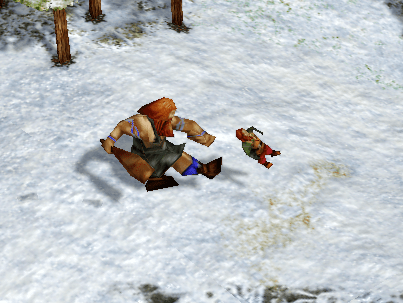 The war academy will feature 2 units, that will undoubtedly form the backbone of the Chinese army. Fans of Age of Empires II and III will recognize these units already so their uses will be instantly recognizable. The Chu Ko Nu and Halberdier. Where the Halberdiers are the Chinese’ primary (but not only) answer to enemy cavalry, the Chu Ko Nu are a beefed archer unit and probably a contender for being the best ranged unit in the game. Fans of the series will not be surprised to see them fire multiple arrows in a single volley.

A vast country like China must of course have a good mounted force at its disposal to quickly deploy reinforcements to remote areas of the Empire. Therefor, the Chinese can create 3 units from their stable. Although the units might ring a bell initially, they’re designed a little different to add a fresh twist to the counter system.

Chinese players will always start with 2 Scout Cavalry units. These units can later be trained and upgraded at the stable. They’re cheap raiding units with no particular strengths, other than their cheapness. It’s up to you whether you use your starting scouts straight away to harass your opponent or save them to combine them with your first rushing units… 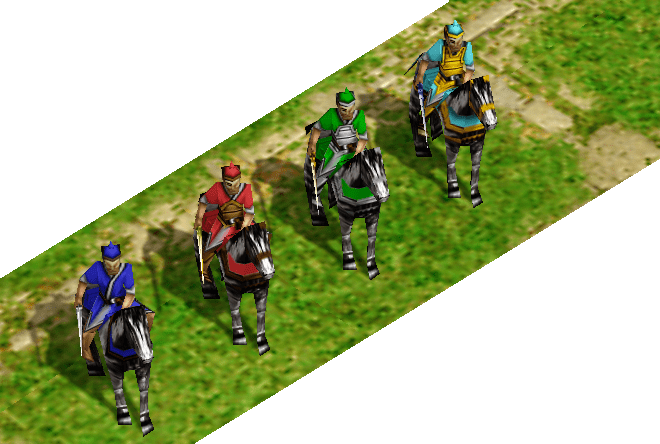 Chinese Scout Cavalry through the Ages

Originating from the Iranian Steppes, Cataphracts (literally meaning, “fully armored”) are another fan-favourite unit returning to the Age-series. Although commonly associated with the Romans (and Byzantines in Age of Empires II), Cataphracts were introduced in Ancient China way before the Roman empire even existed. Chinese Cataphracts are not only heavily armored, they also do a bonus attack against infantry units, defying their normal counter units. This extra bonus comes at a cost of being a bit weaker to archers and they’re an expensive unit overall.

The unit is available starting from the Heroic age, so you’ll have to advance far enough before throwing off enemy infantry with hordes of horsemen. 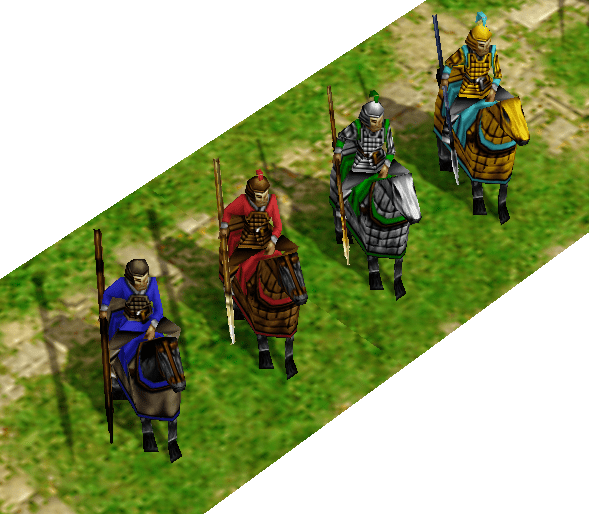 Chinese Cataphracts through the Ages

Last but not least we cannot head East without a nod at the fine mounted archery skills of the soldiers in the region. And if Cataphracts are allowed to counter their counter unit, so are these men! The Mounted Archer will have a bonus against cavalry units. Although this sounds extreme, they’ll also have their weaknesses. First of all, these units come at a cost, but secondly, they’ll still fall easily against the normal archery counters. So Peltasts, Slingers, Turmas and Huskarls will have a field day when meeting Mounted Archers. 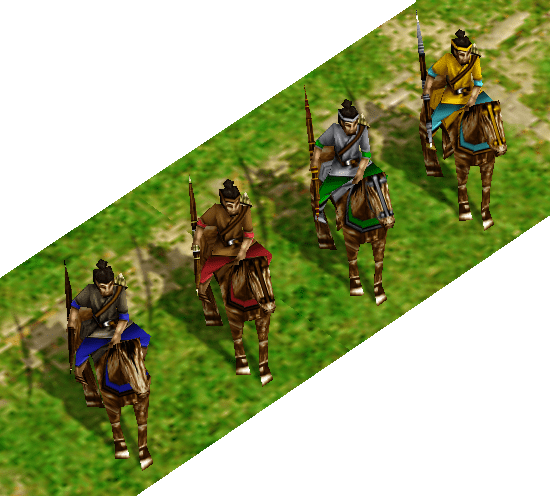 Chinese Mounted Archers through the Ages

Last but not least, we have the Castle. The oriental answer to the Greek Fortress, Egyptian Migdol Stronghold, Norse Hill Fort and Atlantean Palace. It will feature 2 siege units and a General. This General can be combined with your existing armies to give them a boost. Exactly how the siege units will work, and what they look like, we’ll reveal in other sneaky screenshots in later dev blogs 😉

Can’t wait! Is this still scheduled for release in January? Price?

I do so love units that break the meta, and these guys have 2 of them. Elephant hordes won’t know what hit them. But there seems to be no answer to archers. Best they can do is scout cavalry. Sure hope they’ll be more powerful than the Greek katascopos.

Fair enough, Wikipedia just said it came from the Greek. It clearly isn’t the Chinese name for it though. I always liked how the Greek units actually use the names in their language. Wish they’d done that with the rest. Obviously it might cause some confusion initially, but then I’d never heard of a hippikon or toxote before either. We soon learn and it’s a nice way to feel like you actually are in that culture. Makes the units feel more unique too.

Some of the Greek units (e.g. Peltast) use English versions of the Greek names. The reason they use the original (or close enough) names of Greek and Norse units and not Egyptians is because much of English is derived from Germanic languages and Greek, so the words look familiar and it’s not difficult to work out how to pronounce them. The reason they’re using “Chu Ko Nu” is because it’s taken from AOE2, and in that game it needed a name different to the standard Crossbowman.

I guess that makes sense. Though if they just used pinyin (the English transliteration of Chinese characters) without the tones, its not really difficult to get a ‘close enough’ pronunciation – just as chu ko nu isn’t hard to pronounce – presumably the gods themselves will have their actual names as well. Would have been nice to get it on the units too, but I guess I’ll live with that. Wonder if I can figure out a way to mod it.

Nearly everything written in the game is in one easily editable file, so it would be simple to mod. There is a language file for each language available in the game, so if you wanted to go really crazy, you could replace the English names with whatever is in the Chinese language file (in Chinese characters).

Good to know. Will definitely look into that, thanks.

Oh, sure. The regular Joe’s, toiling in the fields all morning, picking at gold seams all afternoon, and kicked around by minotaurs and kraken around tea time. Then they go home and discover their ruler doesn’t think they qualify as ‘unique humans’. That’s just lovely ;P

nice to have an update on this after a long time… can’t wait to get a preview of some of the other stuff like myth units, god portraits, music (assuming u guys have the budget for new scores and sound fx)

Awesome! get hyped yo

btw is there going to be a voiced campaign for aom the way there was for african kingdoms?

Maybe, maybe not. Can’t really tell until we have stats and see the whole package in action. 2 cavalry counters, 2 infantry counters is in line with other civs, albeit in an interesting way. Atlanteans might struggle to bring down cataphracts (until mythic) and norse might have issues with cats and mounted archers. On the other hand, a lack of any real archer counter could make them weak against all but norse, perhaps. But nowhere near enough information to judge it yet.

When is the next DevBlog landing on earth? Anytime soon?

0
« Previous 1 2
Our website uses cookies to give you the most relevant experience and to improve performance. By clicking “Accept”, you consent to the use of cookies.
AcceptCookie Settings
Manage consent