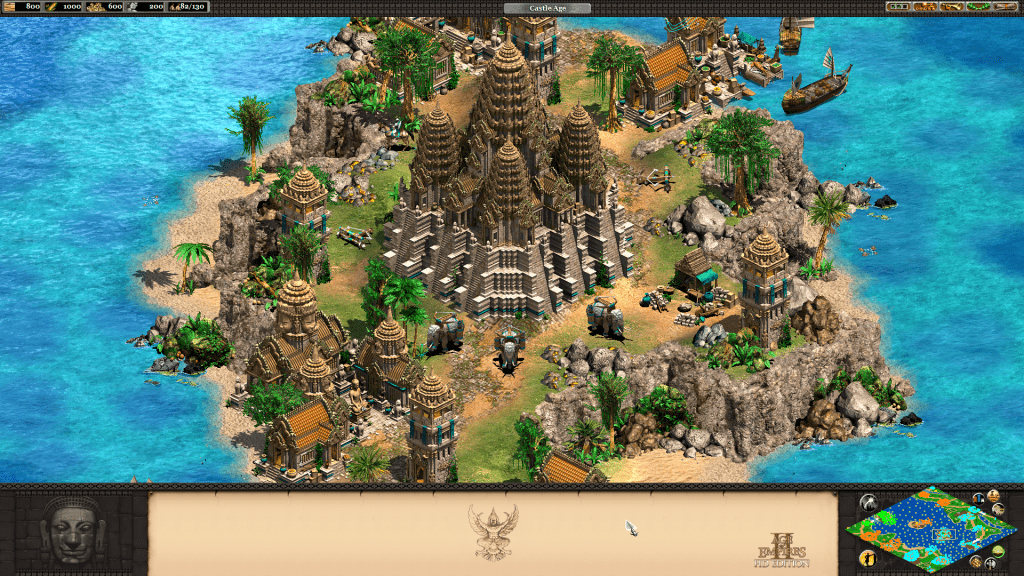 Overthrow the king of Khmer, build strategic alliances, and settle the score with your historic rivals. Construct the largest religious monument in the world and amass an immortal army of devastating siege weapons. The Khmer unique unit is the Ballista Elephant, a mounted scorpion that can be upgraded to fire two bolts simultaneously.

Although the Khmer people had already settled in present-day Cambodia since the second millennium BC, larger polities would only emerge from the first century AD on. Along the Mekong river, the kingdom of Funan (68-550) and the kingdom of Chenla (550-802) profited greatly from trade and rice cultivation. However, it was their successor, the Khmer Empire (802-1431), that became the most powerful state during the Middle Ages in mainland Southeast Asia.

A century after the kingdom of Chenla had disintegrated, a local chief from Southeast Cambodia called Jayavarman II (770-834) reunited the different polities through military conquest and marriages. Following his successful expedition, Jayavarman crowned himself God King (Deva Raja) in 802. This ritual act, inspired by Indian Hinduism and local traditions, not only marked the birth of the Khmer empire, but also legitimized the Khmer kings as manifestations of the Hindu gods Shiva or Vishnu. Successive rulers used this power to intervene in many aspects of the Khmer society:

First, kings ordered largescale waterworks. Because monsoons greatly affected water levels, proper irrigation systems were essential for the widespread rice cultivation. At the same time, the government did not try to control production itself. Instead, local officials collected a levy from the traders in the marketplace, which was mainly run by women. Temples served as storage and were connected by an extensive network of roads, facilitating long-distance trade.

Second, Khmer rulers funded extensive building programs as they regularly moved their capital. This relocation was often accompanied by the construction of a new state temple that acted as the center of the city and a place for worshiping the king. Angkor, one of the largest pre-industrial urban areas, consisted of seven capital cities and housed over one thousand temples. In the early twelfth century, Suryavarman II (1113-1150) constructed the most famous state temple, Angkor Wat. Today, the temple is still considered the largest religious complex in the world, testifying to the engineering and architectural skills of the Khmer.

Finally, the king commanded the army. Between the ninth and fourteenth centuries, Khmer rulers continuously conducted military campaigns and conquered much of Southeast Asia. Their major enemies were the Siamese, the Vietnamese, and the Cham, who raided Angkor in 1177 and 1178. The Khmer had no standing army, but relied on appointed captains who were responsible for conscripting peasants in times of war. Aside from this large contingent of peasant infantry, the army deployed war elephants, sometimes mounted with ballistae.

The Khmer not only fought other civilizations. Because kings married multiple women, disputes between different lineages often resulted in civil wars. For example, after Suryavarman I (1002-1049) had claimed the throne, he fought eight years with other contenders. Political instability was inherent to the Khmer society. However, from the fourteenth century on, civil wars became more frequent as rulers were unable to deal with other, structural problems: rice cultivation declined due to a cooling of temperature, the conversion from Hinduism to Theravada Buddhism undermined the legitimacy of kings as divine ruler, and warfare with the Siamese resulted in a continuous loss of territory. Eventually, king Ponhea Yat (1405-1463) abandoned Angkor in 1431, marking the end of the great Khmer Empire.